This being a blog about science in the field, not a ton happens on here when Frost is not actually 'in the arctic.' However, 2016 has been a year filled with happenings that are worth sharing (one of which I won't delve into is the recent election). 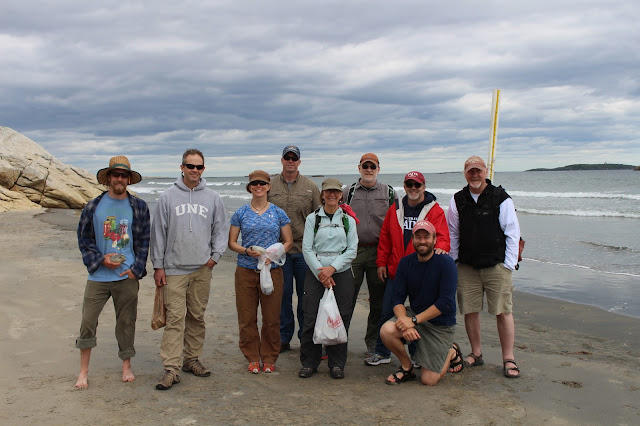 During the 2015 field season (see previous blog entries), a plan was hatched to further outreach within the Ingoya arctic-climate research project by running a teacher workshop and it turned out to be a great success! It ran immediately following the 4th International Sclerochronology Conference in Portland, ME (1st week in June) and was dedicated to sharing information on the paleoclimate sciences but more importantly actual field & lab techniques that could be employed in middle & high-school classrooms. Below I've included pictures from the 3-day event that will explain the content and activities covered. A big thanks to the Ingoya crew but also to Bates College, Laura Sewell, Thornton Academy for their help in making this happen!


Many of the teachers involved in the workshop were able to take home tree cookies for classroom use. With my tree collection now empty, I set to making another group of (7) identical tree cookies from a large white pine (thank you Matthew Frost, logger extraordinaire). The aim was to find an exemplar record sufficiently large enough for class data-sets but also one that had some variation within the record and could be tied to potential environmental forcers of tree growth over time in the instrumental record. 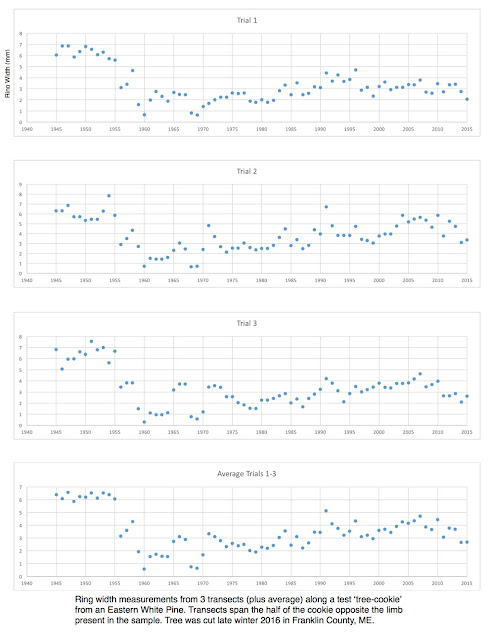 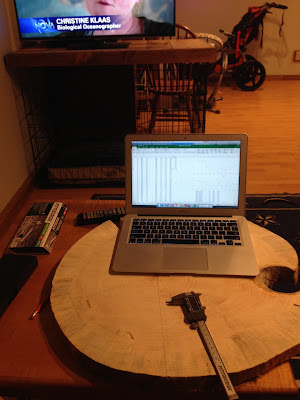 Lastly from the Teacher Workshop, I've included a link below to my guide for high school teachers (or any other interested parties not willing to hold me liable) to embed their own clams in epoxy. Great fun for the budding sclerochronologist:

A Teacher's Guide to Embedding Clams in Epoxy

2016 saw 4 of my closest friends were married within 5 weeks of each other. That made for a rather joyous and busy time of which I had the honor of being best man, officiating one wedding, dragging my poor wife (8 months pregnant) to stay in a lean-to without heat for a fall weekend in Northern New Hampshire, and missing the first day of school to be at my oldest friend's wedding in Petersburg. Alaska. As you may have picked up from the previous sentence, my wife and I also welcomed our son (and soon-to-be field assistant), Clark, into the world on Oct. 23.

On the climate front, never has the subject of climate change or the implications of a warming world been more at the fore-front of our news. First realizing the enormity of the issue as a budding 18-year old scientist in 2001, I have long held climatological studies near and dear and am heartened by both the press the current situation is receiving and our strides in developing non-fossil-fuel energy alternatives. On the other hand, I have my worries that it has become so mainstream for many to outright deny an entire branch of science, the very observation, hypothesis, results, and discussion of it, and politicize it outright whenever the subject arises. I can tell you from experience, climate-scientists are not fat-cats passing on biased information to fill their pockets/gild their resumes and the best-funded grant proposal would be the one that legitimately runs counter to the current scientific consensus on our changing climate and the causes...with factually based evidence. Most climate scientists I know are not naturally political and their agendas usually consist of recovering mud/fossils from remote locations and "ooh-ing" and "ahhh-ing" over data sets, pictures, & landforms when they are forced back into their labs and on their computers. As I step off the soap box, I encourage all to read a diversity of information on our changing climate but more importantly go explore and see your own backyard as well as new and exiting places because it is hard to gauge what is happening outside when your major source of temperature change is a thermostat.

A good place to start reading is the most recent Arctic Report Card by NOAA:

Some videos and other items to get through March...

Included are some video updates and other miscellaneous items to help get through March...plus, one can only look at a closing blog post from the 2015 field season so long...
Posted by Dan Frost at 12:51 AM No comments: