A good way to deal with a 6 hour time change is a forced circadian reset. Don’t nap, stay up until a reasonable night’s turn-in time, wake up early and douse with strong European coffee, then take a brisk t-shirt walk through your new surroundings at 70 degrees latitude.
Tromso Climate 101: There’s snow in the hills and the water is cold enough to make a Maine lobster reconsider that timeshare in Florida. So, how can one be comfortable in a t-shirt in the arctic? The climate of this region has a few things going for it to be so stable and humanly hospitable. 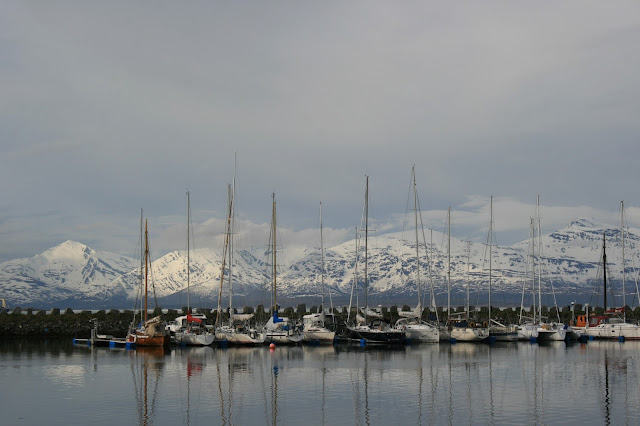 1. Coastal Climate: Warmer in the winter, cooler in the summer. Coastal environments have a tendency to ameliorate the climate of land in close proximity to them. Being such a large thermal mass that doesn’t easily/quickly cool or heat, the water stabilizes the surrounding air temperatures.
2. The Gulf Stream: As mentioned previously, the same warm water ocean current that keeps the UK from being as cold as Hudson Bay terminates in this region. I can tell you from personal experience that there is no way I would consider a 6 am walkabout in a t-shirt at this same latitude in the Canadian Arctic (a polar desert with no such generous current).
3. The sun is out all the time: The midnight sun, as diffuse as it is in these northern climes, provides another stabilizing effect on the climate. Winter temperatures can vary greatly when the solar power is cut but the summer varies considerably less.

The forecast calls for rain to move in shortly but for now I will enjoy the sun and hope we don’t get poured on during our day of moving gear and food for ferry transport.