In an effort to keep my Honors Geometry students at home in the loop on how the subject applies to any number of different situations here, I've included one of my 'Video Jeopardy' questions below. Please feel free to play along and I will post an answer in the near future... 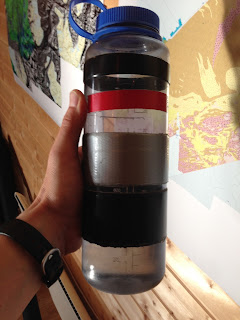 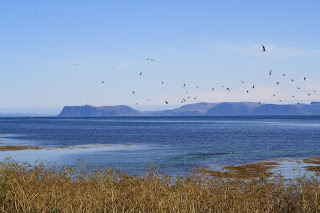 This morning’s objective was to join the ‘infantry’ on the land/beaches and lend a hand to the folks completing somewhat more terrestrial work. Specifically, Julia Savage is a rising senior at Bates College (under advisor Prof. Mike Retelle) and a Geology/Politics double major. Julia has the ‘unique’ experience of being introduced to Quaternary Geology with me as a high school junior in my environmental science class at Carrabassett Valley Academy and is now working with Mike (my former advisor and good friend). Her senior thesis will be based on this season’s field work and the working title reads “The use of the marine bivalve Arctica Islandica in paleoclimate reconstruction, 3,000 year old marine terrace, Ingoya, Norway.”

Here is a summary of her work so far: 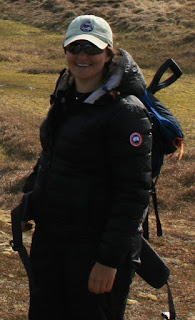 Climate of the North Atlantic region through post-glacial Holocene
time has been greatly influenced by changes in regional ocean current
systems and associated climate feedback mechanisms. In recent decades,
temperatures at high-latitudes have changed at a faster pace than
those at sub-arctic latitudes, and models predict further amplified
changes in the future. This particular study focuses on climate
reconstruction for the late Holocene, i.e. the last 6,000 years, using
growth increments from the Arctic bivalve Arctica islandica as a proxy
for sea surface temperature (SST) changes.
Our study site, on the Island of Ingoya , northernmost coastal
Norway, is uniquely situated within the influence of three ocean
currents: the Arctic Current, the North Atlantic Current, and the
Norwegian Coastal Current. The northern boundary of the Atlantic
Meridional Overturning Circulation system (AMOC) also occurs in this
region. This boundary is dynamic, meaning that as climate changes, the
AMOC will shift further south or further north. Due to proximity to
these systems, A. islandica samples collected on Ingoya should display
a strong signal of oceanic and atmospheric circulation patterns, such
as the Atlantic Multidecadal Oscillation (AMO) and the North Atlantic
Oscillation (NAO).
The site that I have previously worked on, called the Ingoya Mollo
(Norwegian for “Breakwater”), is a ~3m high terrace that contains
sedimentary layers with abundant bivalves including A. islandica and
other clam species . The majority of samples collected from this
exposure were dated to be ~2,000-3,000 years before present (yr BP),
but outliers fell as far as 5,000yr BP. In this project, I am focusing
on the description and interpretation of the fossiliferous
stratigraphic sequence in the Mollo. This will be done through
sampling and subsequent 14C dating of the shells. From this
information, I hope to then build a reconstruction by crossdating
growth patterns in the shells that will in turn provide a “snapshot”
of marine climate in the period circa 2,000-3,000yr BP. This snapshot
will then be used in hand with snapshots from other climate intervals
to provide context for recent changes in the arctic marine system.

We couldn't be happier. The GoPro worked unbelievably well to capture footage of Arctica Islandica that hasn't been seen before. Oh, and there are lots and lots of clams in these waters. What is uploaded is just a fraction of what we managed to get. Please don't mind the videos of the camera going underwater and coming out as it is worth seeing how it starts and stops. Psyched here in Ingoya...sorry if the quality is low here but I will be working on fixing that...all video is from ~15-20 ft in depth in the Barents Sea, taken from the apparatus shown in the earlier post. All sites are close in proximity to areas previously sampled for this study.

(Re-reading this a few hours later I realize this may not look earth shattering but it is what we get excited about...the other option to get a view like this is to travel to the bottom ourselves...nobody wants that)

Flounder if you look closely...

The infantry (our beach/paleoclimate team of Mike, Julie, Julia, and Sam) set out for their first day. Hopefully their early trip recon. will yield some interesting insight, ideas, and inspiration for their projects as they take form this week.

Michael Carroll (Akvaplan-niva), Al Wanamaker (Iowa State), and I (Thornton Academy) are out today to retrieve moorings from the small boat and test our GoPro underwater filming capabilities. I will post more once we get back and I can work up the files but here is a quick clip of our test in super low-resolution, taken from the base camp dock.

The video posted above was taken from a GoPro Hero 3 attached with a roll bar mount onto a ~10 ft. pvc pole. The pole is ideal for filming from the boat (our dock!) at low speed and minimal depth because it gives us a static connection underwater which will not spin or dance about in the water simply due to our grip holding it steady. Now, how do we take this out in the field?
Goal: We want to get underwater footage of the seafloor habitat at our clambed locations. Quite a bit of meaningful data can be gleaned from such video, or still shots taken out of it. Having worked for years on marine ecosystems through the overtop ice surface or from a boat, it can be extremely valuable to have a normally off limits, first hand visual account of being immersed in the environment you're investigating.


Solution: TA engineers, how do you think this will work? Open for comments from Mr. Slack/Lukas/Hall...

We ended up using a heavy rock anchor, the reel-end of a former fishing rod, zip-ties (god love 'em), and a wooden sail constructed from a 1x4 plank and a 1/8" plywood vane. Our hope is that during a near dead-drift, the camera will be positioned at the ideal location above the bottom (w/o anchor dragging) and the 'sail' will stabilize the camera mount. Remember that even though the whole rig will rotate as a rigid body if it moves but that means a larger arc length swept out by the end of the sail will translate to a very small disturbance to the camera view opposite. Any flotation of the wood will be counteracted by the braced mount to the line and the weight of the heavy anchor. We think this should be enough stabilization to provide adequate shooting conditions.

With the seas/wind dying down a bit, it is almost time to hit the ocean. We'll let you know how it turns out.

Here at last. Signing out for the night but let the field science begin. Here are some views with the clouds breaking at our new base camp, click to enlarge the series. 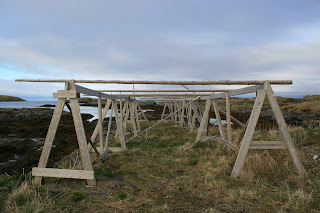 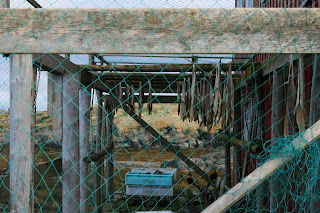 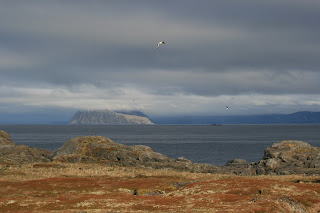 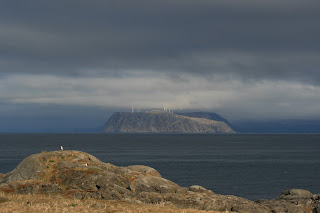 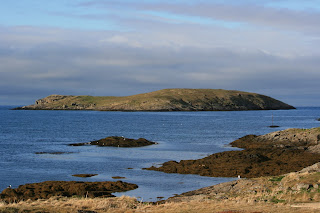 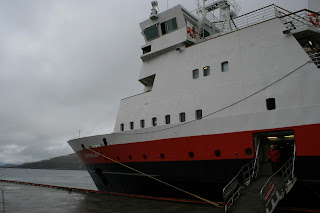 These videos and images document the team's movement from the relatively urban city of Tromso (pop. ~70,000) to the island of Ingoya (pop. ~21).

Food is bought, bags are packed, and hotels are checked out of. The only thing left is to consolidate all of the gear and load the Hurtigruten (our ferry) for the trip to Havoysund, then Ingoya. It is almost unnerving to have everything taken care of with a few hours to spare. Hurry up and wait, then quadruple check/recheck to make sure you've got it all, 'cause if not...well...

In anticipation of things being very hectic with our moving of people and gear to camp, expect images to be uploaded whenever they are ready and explanations to follow...